microStart is a Belgian microfinance institution supported by BNP Paribas Fortis and Adie (French pioneer in microcredit), active since 2010. The main focus and objective of microStart is to improve the life of people excluded from the traditional banking system and willing to develop their own activity by offering them loans going from €500 to €15.000 euros.

After launching its activity in Brussels, microStart opened agencies in Antwerp, Ghent, Liege and Charleroi. Besides providing microloans, microStart also offers advisory services to anybody willing to improve its knowledge in business management. Since its creation in 2010, microStart has constantly grown in order to provide the best service possible. After having made a social impact study in 2014 microStart would now again like to re-evaluate the socioeconomic impact of its activity on its clients and on the Belgian society as a whole.

This paper will first give an overview of the start-up environment in Belgium as well as the microcredit industry in Europe and Belgium so to give an idea of the ecosystem in which microStart operates. I 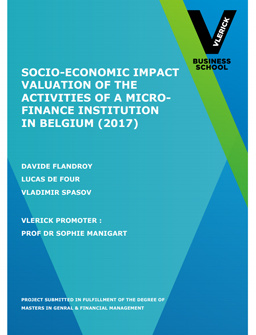