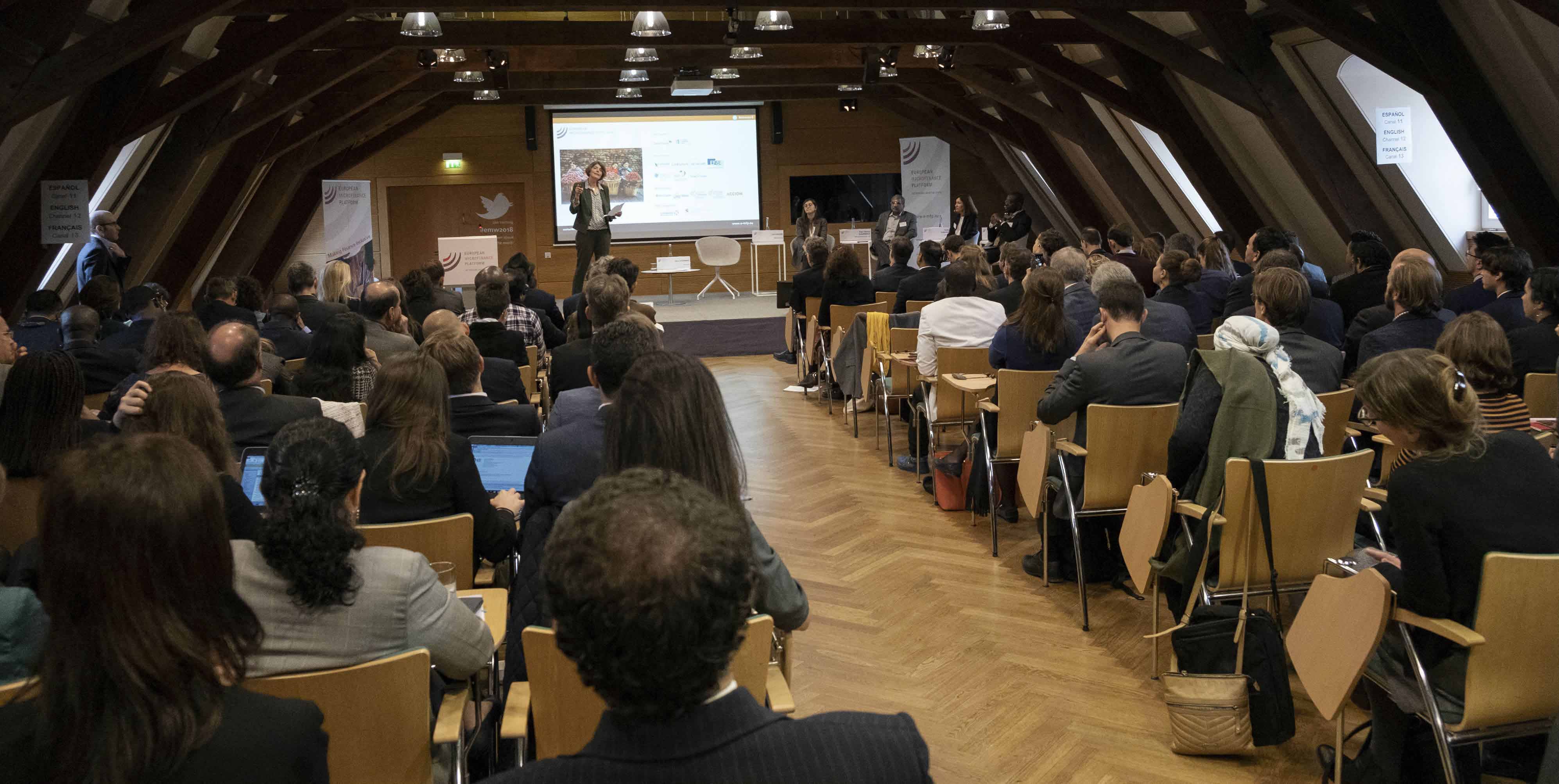 Luxembourg, 19th November 2018 - European Microfinance Week (#EMW2018), organised by the European Microfinance Platform (e-MFP), concluded Friday in Luxembourg, with an ‘Oxford-style’ plenary debate on the future relevance of Tier 2 & 3 MFIs, with Maria-Teresa Zappia from BlueOrchard Finance, Alex Silva from OMTRIX, Kaspar Wansleben from Luxembourg Microfinance Development Fund, and consultant Maude Massu debating the motion “This House Believes There’s No Room Left for the Little Guy”. Both Affirmative and Negative teams addressed issues such as the commercial viability of smaller institutions, the key element of (economies of) scale and cheaper cost of capital that Tier 1 MFIs can offer and access, the key role smaller MFIs can play in offering non-financial services and supporting the lower-income segments, and their unique role in ‘preparing’ clients for access to the mainstream financial services via Tier 1 MFIs and commercial banks.

The closing plenary followed two days of workshops and plenaries: an opening session moderated by Triple Jump’s Gera Voorrips with representatives of the three European Microfinance Award 2018 finalists - Advans Cote d‘Ivoire, ESAF Small Finance Bank in India and KMF in Kazakhstan, along with Lisa Chassin from PHB Development, who presented their technology initiatives and addressed some of the cautionary issues raised by Microsave’s Graham Wright in his earlier keynote address.

Friday morning’s plenary was entitled ‘Where next for microfinance: a view from The Founders’, which was moderated by Bernd Balkenhol from University of Geneva and brought together two practitioners who were pioneers in microfinance in their respective countries: Essma Ben Hamida, Co-Founder of Enda Tamweel in Tunisia, and Carmen Velasco, Founder of Promujer in Bolivia; as well as one of the giants of microfinance academia, Hans Dieter Seibel, co-founder of e-MFP and Professor Emeritus from the University of Cologne.

Asked to list any disappointments after 30+ years in the sector, the panellists agreed that regulation – and the related issue of political interference, remains something they wish they could overcome. Regulation has constrained MFIs’ original role as disruptors, stymied innovation and limited the benefit that institutions can give to clients – such as taking deposits. A discussion concerned the importance of continuing to link financial inclusion to wellbeing, and not just access to financial services. However, the panel were upbeat that beyond the obvious trends of commercialisation and technology, the biggest impact of microfinance over the decades has been how it has enabled (especially) women to change their families and communities for the better, giving girls in particular new opportunities that their mothers lacked.

Beyond the plenaries, this year’s conference involved a particularly diverse and interesting range of sessions, with over 100 organisations taking part in 25 sessions as diverse as making insurance markets work for the poor, crowdfunding, advancing access to financial services for refugees, financing clean energy, meeting the financial needs of smallholder farmers, financial education, youth finance, microfinance and the SDGs, social performance management, financial inclusion through technology, regulation in the Fintech/DFS space, client protection and technology, and overindebtedness in Cambodia.

Financial Inclusion through Technology was the topic of the €100,000 European Microfinance Award 2018, and Thursday evening saw the long-awaited ceremony at the European Investment Bank, presenting the three Award finalists and the winner – Advans CI of Ivory Coast, which won for its innovative digital savings and credit solution, in partnership with a leading MNO, for cocoa farmers. The High Jury reported a close decision, with outstanding applications from the two other finalists, ESAF Small Finance Bank of India, and KMF of Kazakhstan.

The ceremony at the European Investment Bank (EIB) involved speeches by Dr. Werner Hoyer, President of the EIB; Mr. Romain Schneider, Luxembourg Minister for Development Cooperation and Humanitarian Affairs; and a keynote speech by Michael Schlein, President and CEO of Accion. Dr. Hoyer observed that we are living in an era of technology that has brought tremendous benefits to our lives, and can be a clear driver of change through disruptive business models in inclusive finance. Dr. Hoyer advocated partnerships with FinTechs and regulators and implored the sector to embrace the clear and significant challenges that the FinTech revolution brings, and not to shy away from them.

Mr. Schlein argued that microfinance’s two greatest contributions are indirect: showing that, more than charity, “we need to harness capital markets; and showing you can have great social impact and strong financial returns…impact investors and entrepreneurs are following that lead”, he said. He added that there remains much more to do, and it is a “failure of imagination” on our part that keeps 3 billion people left out of or poorly served by the financial system. Technology can create value for the customer, and if MFIs are ambitious, Mr. Schlein argued, reiterating Mr. Schneider’s message from the High Jury, they will ensure the customer is “at the centre”.

Mr. Schneider said that the potential for digital financial services remains largely unexploited. For many MFIs, the embrace of technology means the risky rethinking of business models. But it is imperative that all aspects of finance undergo digital development, he said, emphasising the High Jury’s message that “we must put the customer at the core of digital financial services”.

Continuing the technology theme, European Microfinance Week wrapped up on Friday afternoon with thanks and a summary message from e-MFP’s Chairwoman Laura Hemrika, who implored MFIs to not be afraid of incoming FinTechs, to partner and share knowledge, and to see technology as more than just increasing efficiency of existing processes, but an opportunity to re-make the financial experience for low-income clients.

Digital transformation in the microfinance sector is here and now!