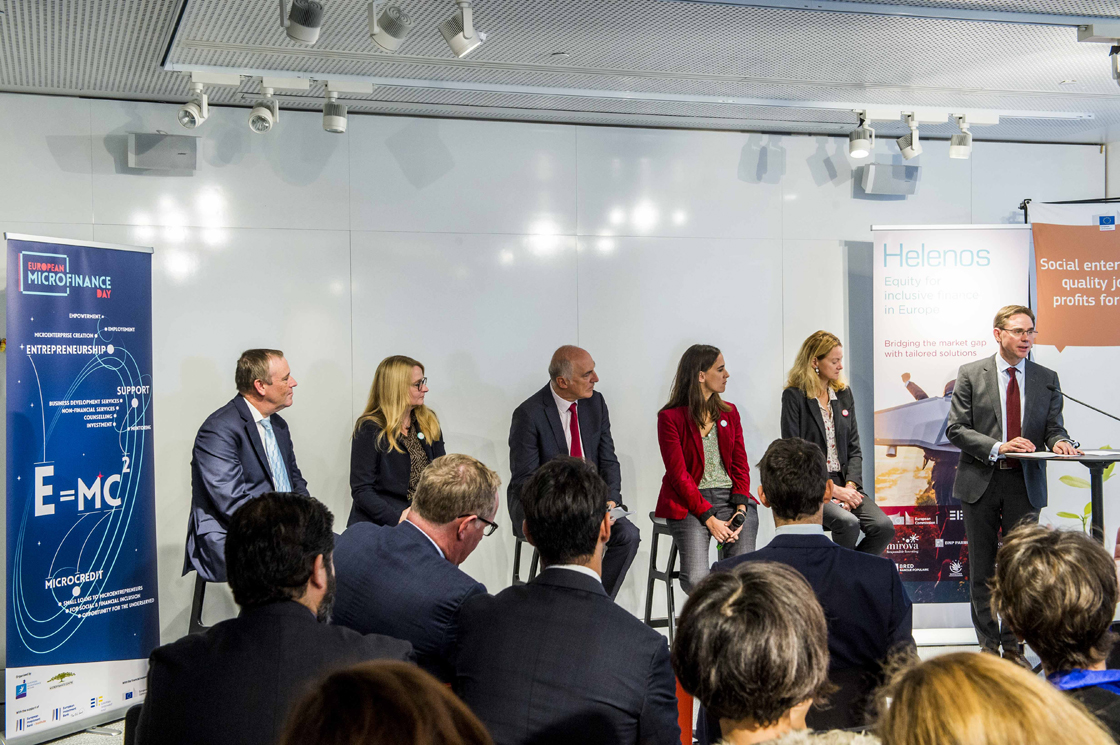 Brussels, 26.10.2018 - Today, the European Microfinance Network and the Microfinance Centre have closed in Brussels the 4th European Microfinance Day, an initiative launched in 2015 to highlight the impact of the microfinance sector in Europe from a social and an economic perspective. This 4th edition has underlined the importance of the support from innovative funding sources for the further positive development of the sector, which in 2017 reached an outstanding gross microloan portfolio of €3.2 billion and served 988,457 active borrowers[1].

EMN President, Elwin Groenevelt, said: “The European microfinance sector has developed into an important channel for entrepreneurs and individuals to be financially independent and socially included. This has resulted in more jobs and lower welfare benefits and that is good news for the individual, the government and the local economy”. And added: “That is why microfinance organisations deserve strong support from local and European governments!”.

The Director of the MFC Board Christian Jurma, said “Microfinance in Europe is gradually being consolidated as an essential tool of social policy for the promotion of self-employment, microenterprise support and the fight against social and financial exclusion. Going beyond the figures, there are in fact men and women who are willing to take control of their futures with the help of microfinance institutions”.

During the event, the European Investment Fund (EIF) and the Helenos Fund have signed the first capacity building agreement in Europe under the EU Programme for Employment and Social Innovation (EaSI) to support microfinance providers across Europe. This new agreement was made possible by the European Fund for Strategic Investments (EFSI), the heart of the Investment Plan for Europe.

This first ever EaSI capacity building agreement allows to launch Helenos with a targeted investment capacity of EUR 25 million for equity and quasi-equity investments to around 25 microfinance institutions (MFIs) and social finance providers across Europe over the next 5 years. Helenos targets greenfield, early stage and developing microfinance institutions as well as financial institutions primarily seeking social enterprises. Those financial intermediaries will be able to benefit from expansion capital to support organisational and operational development under the EU supported programme. Originally sponsored by the French Crédit Coopératif and Adie International, the Fund has received beside EIF commitment, the support of prominent European responsible private investors: Crédit Coopératif (France), BNP Paribas, BRED, Mirova, Soficatra among others.

European Commission Vice-President for Jobs, Growth, Investment and Competitiveness Jyrki Katainen said: "The Investment Plan is delivering on our common objectives of jobs and growth while promoting social fairness, equal opportunities and access to the labour market. We need a solid European microfinance landscape to promote entrepreneurship and social and financial inclusion. Today's agreement brings us one step closer and is great news for microfinance institutions and social finance providers across Europe."

EIF Chief Executive, Pier Luigi Gilibert, said: “The EIF is delighted to play a pivotal role in the launch of Helenos, one of the first dedicated equity providers in the European microfinance landscape. Capacity building, which blends economic and social returns, is fundamental for finance providers to be able to deliver sustainable support for micro-borrowers.”

Inpulse Investment Manager CEO, Bruno Dunkel, said: “Helenos is a major step for boosting inclusive finance in Europe and Inpulse as investment manager, will demonstrate how to increase outreach and impact in both microfinance and social enterprises sectors. We will operate with the same competence and passion we have dedicated to manage CoopEst and CoopMed funds over the last 12 years”.

EIB Vice-President Ambroise Fayolle said : “Microfinance providers play a crucial role in supporting the most vulnerable people in the labour market. Today's announcement shows again that the European Investment Bank is committed to supporting micro-entrepreneurs who bring new opportunities and foster job creation in local economies. Obtaining finance is still a challenge in Europe for micro-entrepreneurs and this agreement will help microfinance institutions to further support borrowers with an entrepreneurial spirit.”

The EaSI Guarantee scheme was launched in June 2015 and is funded by the European Commission and managed by the European Investment Fund. Microfinance institutions wishing to apply for capacity building support under EaSI, can contact Helenos directly.

EIF will not provide direct financial support to enterprises but will implement the facility through local financial intermediaries, such as microfinance, social finance and guarantee institutions, as well as banks active across the EU-28 and additional countries that are participating in the EaSI programme. These intermediaries will deal with interested parties directly to provide support under the EaSI Guarantee.

Call Call for expression of interests