Microfinance institutions are gradually evolving into multi-service organisations offering not only loans but also savings, and other financial and non-financial services. Both in practice and in academic writing, savings is gaining interest in microfinance programs, and is becoming a significant part of MFIs service portfolio. The current evolution of microfinance leads the MFIs to diversify their portfolios to better meet their clients needs as well as to benefit from economies of scope. We contribute to the literature aimed at identifying how combining credit with savings affects outreach and sustainability in microfinance institutions (MFIs). We apply the propensity score matching (PSM) method as well as its augmented dose response version to compare the performance of loans-plus-savings MFIs to that of lending-only in a sample of 710 observations from Eastern Europe and Central Asia (ECA).

We use new panel data from MFIs operating in the ECA region during the 2005 -2009 period. Owing to our unique capital structure data, we control for the use of subsidised capital, which related work ignores while recent evidence points to tradeoffs between subsidies and savings (Cozarenco et al., 2016). We find that financial performance and breadth of outreach are positively associated with savings mobilisation, while the evidence on depth of outreach points to a possible mission drift. In the light of the ongoing debate on the mission drift (Armendariz and Szafarz, 2011) which creates new forms of exclusion, this question is important for policymakers, practitioners and scholars. We also note that in most countries in the region, only regulated financial institutions are allowed to mobilize savings, suggesting difficulties in overcoming entry barriers to becoming deposit-collecting MFI.

We contribute to the literature by using PSM approach to establish if in the ECA region savings collection by MFIs improves financial sustainability and credit outreach and thus strengthens the case for continuing the trend toward commercialisation that is taking place across the industry. Another major contribution is our ability to control for the role of subsidy, which has not been previously considered. The empirical results clearly show advantages (better financial results and breadth of outreaches) and disadvantages (mission drift since depth of outreach suffers) for a sample of MFIs in the Eastern Europe and Central Asia region. Further research could use a larger sample of institutions from different regions of the world or a worldwide sample of MFIs for which the capital structure variables including subsidies (donations, non-conventional loans, in-kind payments, subsidised interest loans etc). Further research could also recognise the diversity of the savings products. Moreover, since other work has found that around 25 percent of MFIs experience diseconomies of scope, largely stemming from environmental factors, more research is needed to understand the role of microfinance regulations. 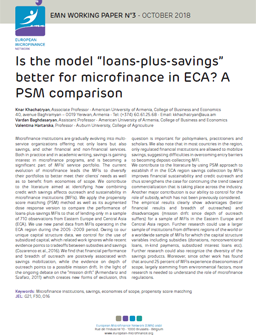 Efficiency and Outreach in the European Microfinance Sector