Since 2004, with the aim to provide a consistent picture of the European microfinance sector, the European Microfinance Network (EMN) carried out, on a biennial basis, a survey of microfinance institutions (MFIs) in Europe. The MFIs surveyed by EMN self-report data mainly about their mission, target, social and financial impact; an overview of the main results of these surveys are reported on EMN overview publications1. The surveys covered a growing and changing group of participants in terms of institutional types and geographical coverage (from 394 microlenders from 16 European countries in 2006 to 195 institutions from 29 countries in 2014) through a survey questionnaire subject to adjustments throughout the different editions.

The last survey (run in 2016 with reference to the years 2014-2015) has been jointly managed by the EMN and the Microfinance Center (MFC2) and it included a wider participation of Eastern European MFIs members of the MFC.

The significant volatility of observed institutions, questionnaire structure, and variables definition undermined so far the quality and comparability of collected data and prevented to conduct a comprehensive analysis of European MFIs’ performance through time. 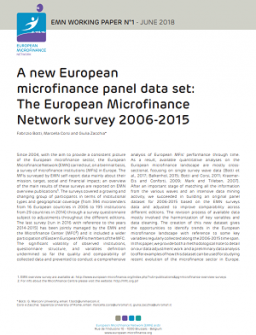