The final report of the study on the impact of microcredit on Syrian refugees clients of Al Majmoua (MFI in Lebanon) is released. The main goal of the study was to detect the impact of microcredit provision on refugees’ households and see which are the changes in their living conditions. The study has been conducted on a sample of 103 final beneficiaries through submitting 2 repeated measures (July 2017 and August 2018) of a set of indicators centred on their households’ characteristics (revenue, consumption, health, education, assets, savings, etc). The study has been made possible thanks to CoopMed Fund’s Technical Assistance Facility financed by the Government of the Grand Duchy of Luxembourg in association with the European Investment Bank. 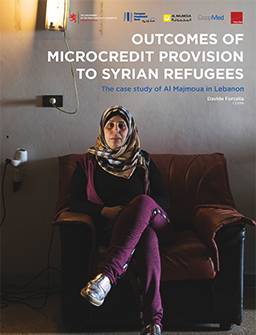 Outcomes of Microcredit Provision to Syrian Refugees in Lebanon