Credit reference agencies are using traditional credit scoring methods that are out of sync with modern financial life and that fail to accurately capture the creditworthiness of many people. As a result consumers are either completely financially excluded or pay a premium for credit, according to research released by trade body Responsible Finance.

Credit scoring is dominated by a handful of companies globally, all using similar data sources and scoring models. Scoring is based on an era when people had steady employment and predictable incomes. In a time of zero-hours contracts and the gig economy, they are out-of-date with modern living.

Existing credit scoring models create ‘invisibles’ and ‘un-scoreables’. In the UK, a survey of 2,000 consumers found that 57% were at risk of being turned down for credit. This included a third who were in full time jobs and a third who earned more than £50,000 per year. Many of those most affected don’t have a credit history because they live in shared accommodation and don’t use credit cards, for example.[2]

In its report, Responsible Finance calls for the adoption of inclusive credit scoring approaches, which have the potential to stimulate greater financial inclusion and fair lending. 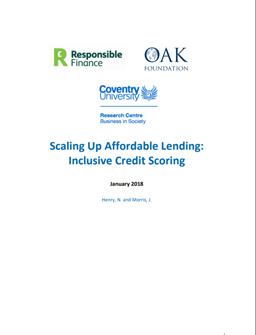 Does Consumer Microfinance Expand Financial Inclusion in the UK?